“You had 550 cord to dummy proof everything, make sure your optics were tied on with something in case it gets knocked off or you lose it. Because, if you lost your optics, it didn't matter if you are a private or a colonel. You lose your optics, and they're not dummy proofed? You're done. You're screwed. You're just done.”

Authenticity in Six Days in Fallujah doesn’t come to a full stop after discussing the gear Marines wore into battle. There’s plenty more to consider, and we wanted to continue this conversation with some of the weapons and attachments fielded by the USMC.

Just like our Marine equipment, our reference material for weapons includes thousands of photographs and hundreds of videos. Military documentation and reports, alongside the hundreds of first-hand conversations with Marines we’ve met along the development path, are key components to driving authenticity home.

Weapon authenticity poses a few more challenges for us as a team. The beginning of the Global War on Terror saw a huge wave of advancements in the weapons industry, and several weapons and attachments were produced in a very short period of time. This meant that Marines in some units had access to certain optics, for example, while others a few blocks away may have been stuck with iron sights. We’ve spoken with Marines who fought with different hand guards, attachment arrangements, and optics on their weapons. Factor in the number of weapons available, and things begin to get tricky.

The interesting thing is you’re going to have Marines who were in Fallujah and carried these weapons who see our showcase and say, “that’s not what my weapon looked like,” and they’re not wrong. Others are going to say, “that’s exactly what my weapon looked like.” Because of how much variation there was for this time period, there’s no one right answer.

Like Marine blouses and trousers, weapons weren’t always in spotless condition after a day of combat. Showcasing varying degrees of use with dust and particles takes hours of reference from high-resolution photos to get finer details correct. In Six Days in Fallujah, players will find Mesopotamia's chalky dust collecting in certain ridges and valleys of the weapons.

Please remember that this is not an exhaustive list and all assets shown are currently a work-in-progress.

There’s only one place to start when considering USMC weaponry in Fallujah, and that’s with the military-issued M16A4. Considered the “bread and butter,” for infantry, the M16A4 was a staple for many Marines. Its versatility is unmatched with the sheer number of attachments that were placed on the weapon and used in Fallujah. 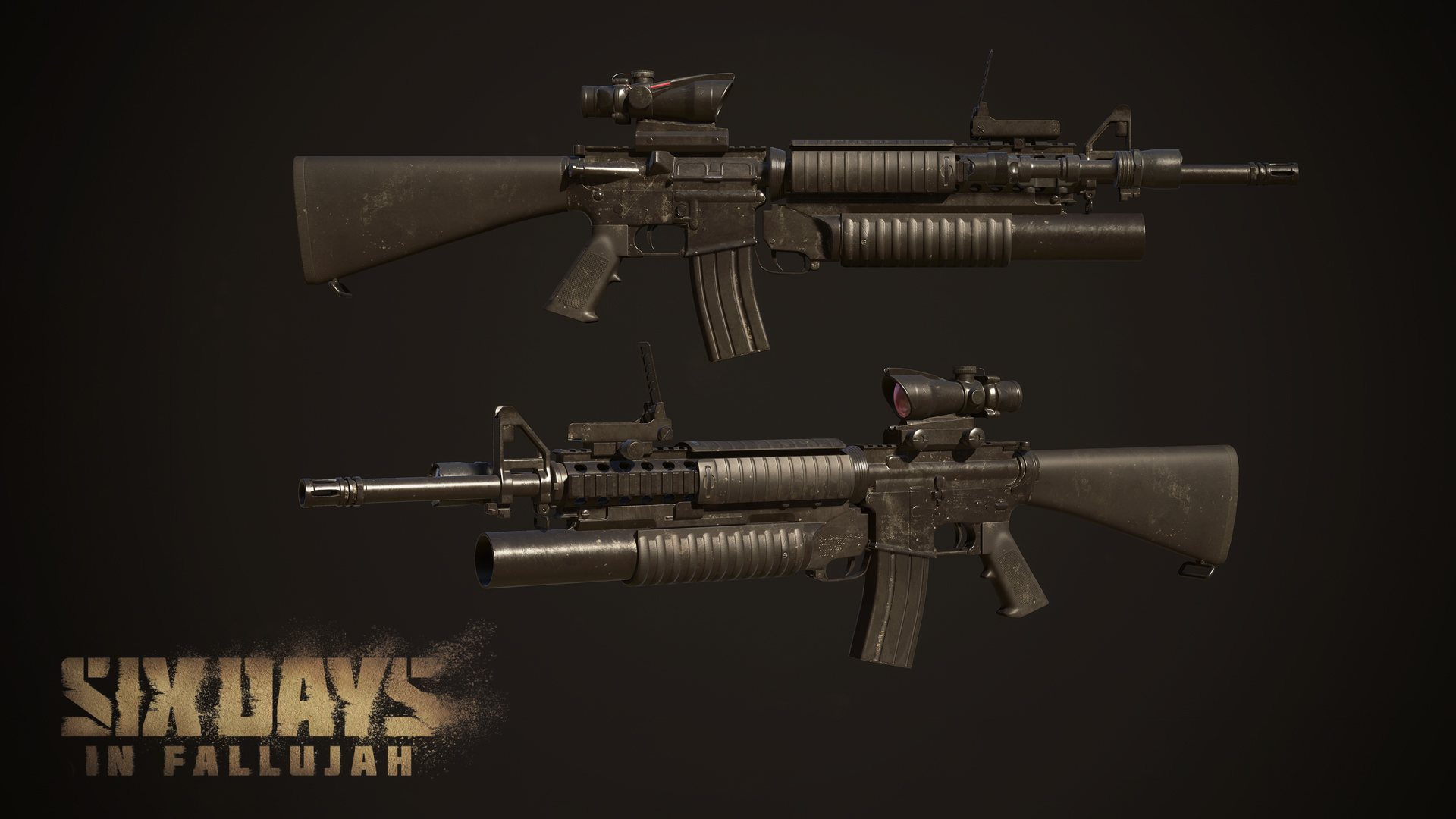 The modeling process varies per weapon, but for the M16A4, we began with a scale reference model and made finer revisions by hand to land with a model that passed our consultant checks. Once the modeling process was complete, our artists passed the weapon to our animation team to rig the weapon.

We teased our ACOG sight in our last SITREP on gear authenticity, but now we’re taking a closer look. Vertical Grips and PEQ-2 Laser Sights were also highly requested by the community, and you can finally see them mounted to the M16A4.

Another variation of the M16 includes the M203 under-barrel Grenade Launcher and Leaf Sight.  This load out gave members of the USMC increased grenade range in a package that was both versatile and easy to handle. Used for direct engagements or close-fire support, players will become very familiar with this kit.

Let’s talk about the M16A4 reload animation and the community feedback we’ve received since our announcement. Our first reload iteration involved pulling the charging handle every time the player reloads the weapon when, in fact, there are various conditions that lend to different reload procedures. For example, the order of operations to get the M16A4 back to “combat ready” is different when the magazine is emptied and dry-fired than if it were to be reloaded mid-magazine.

Proficient gunmanship is obtained through hundreds of hours of practice, and we sought expert council on proper M16A4 usage to deliver an authentic product. It’s hard to resist the “rule of cool” when creating a game, but pulling the charging handle on an M16A4 every time the player reloads the weapon is simply not the entire picture.

As far as audio is concerned, each weapon component that can animate has its own componentized audio. This means existing animations can be edited and new ones created without having to remake the sound effects. The charging handle only makes sound when it moves, and our animators can move it faster or slower or not at all. Whatever we choose, the sound will always match the movement. 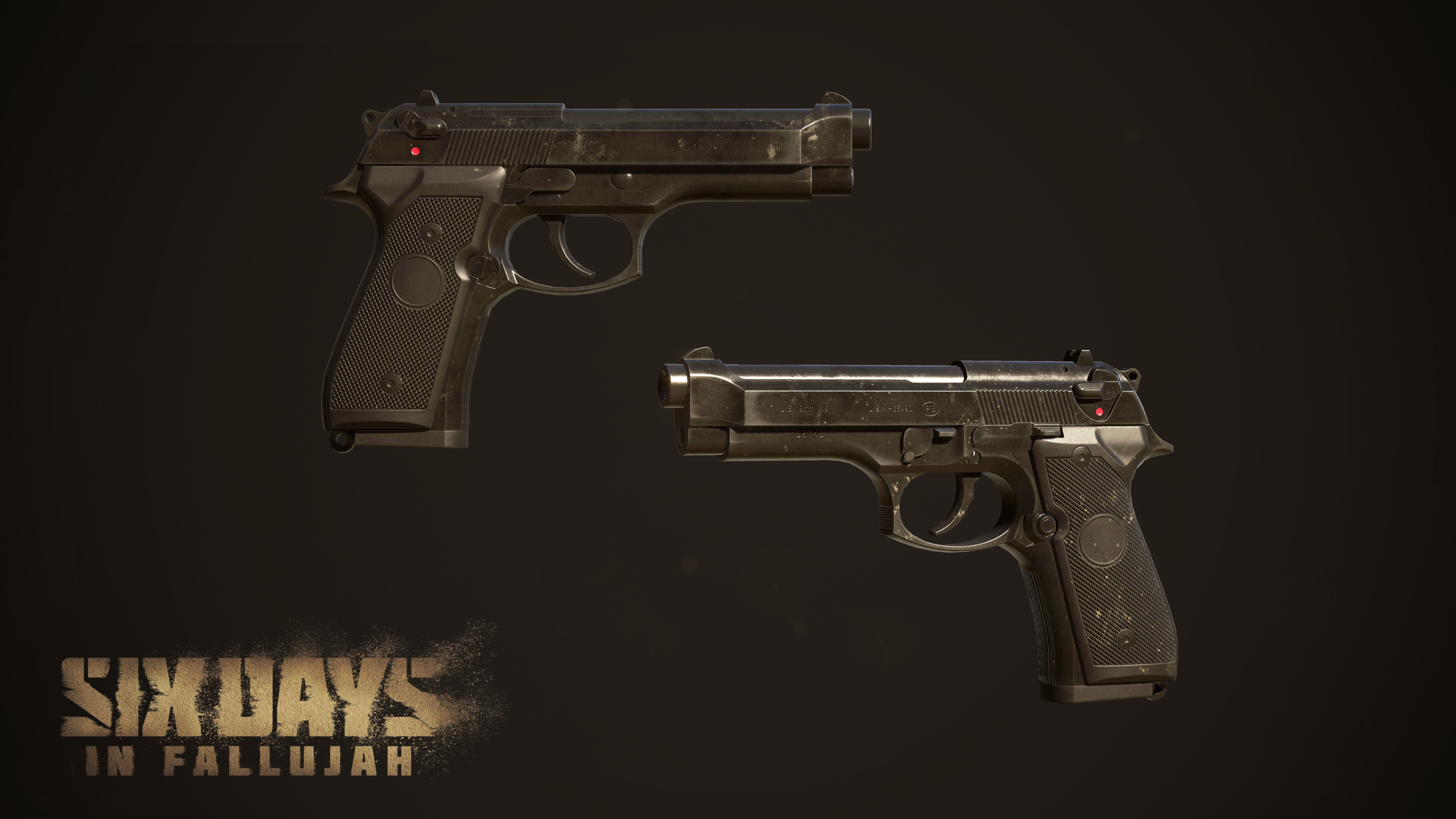 There were many situations in which Marines couldn’t carry their primary weapons and resorted to using secondaries. The interiors of Fallujah heavily favored CQB, and some layouts were so small that the only option available was the M9 sidearm. In other cases, the M9 proved useful after expending all ammo on primary weapons.

Our M9 was modeled completely from scratch, as there wasn’t a reference model that satisfied our authenticity checks. We hope our community enjoys this model just as much as we do. 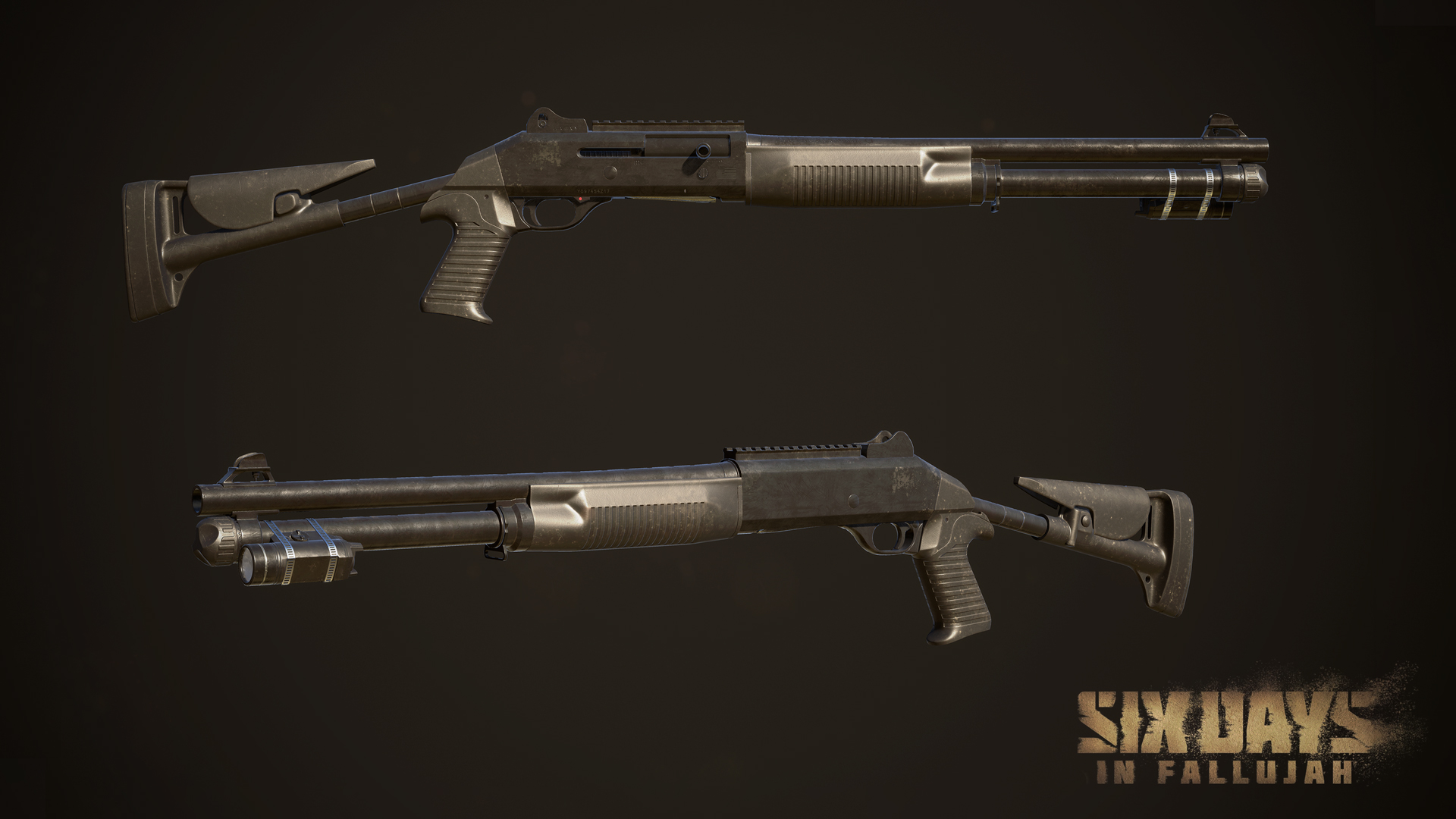 Next up is the M4 Shotgun, which saw some personalization by members of the USMC. Let’s start with some context: Marines are responsible for every piece of equipment issued to them, and losing anything in the heat of battle is the absolute worst-case scenario. The more expensive the gear, the more likely Marines would take additional steps to ensure this didn’t happen. And so, they improvised! Some used zip ties to secure their attachments from being knocked off their person while others used 550 paracords.

We referenced photos of flashlights zip-tied to rifles and shotguns and found it to be a grounding detail that spoke to the culture of the Corps. In Six Days, players will see flashlight attachments zip-tied to the M4. 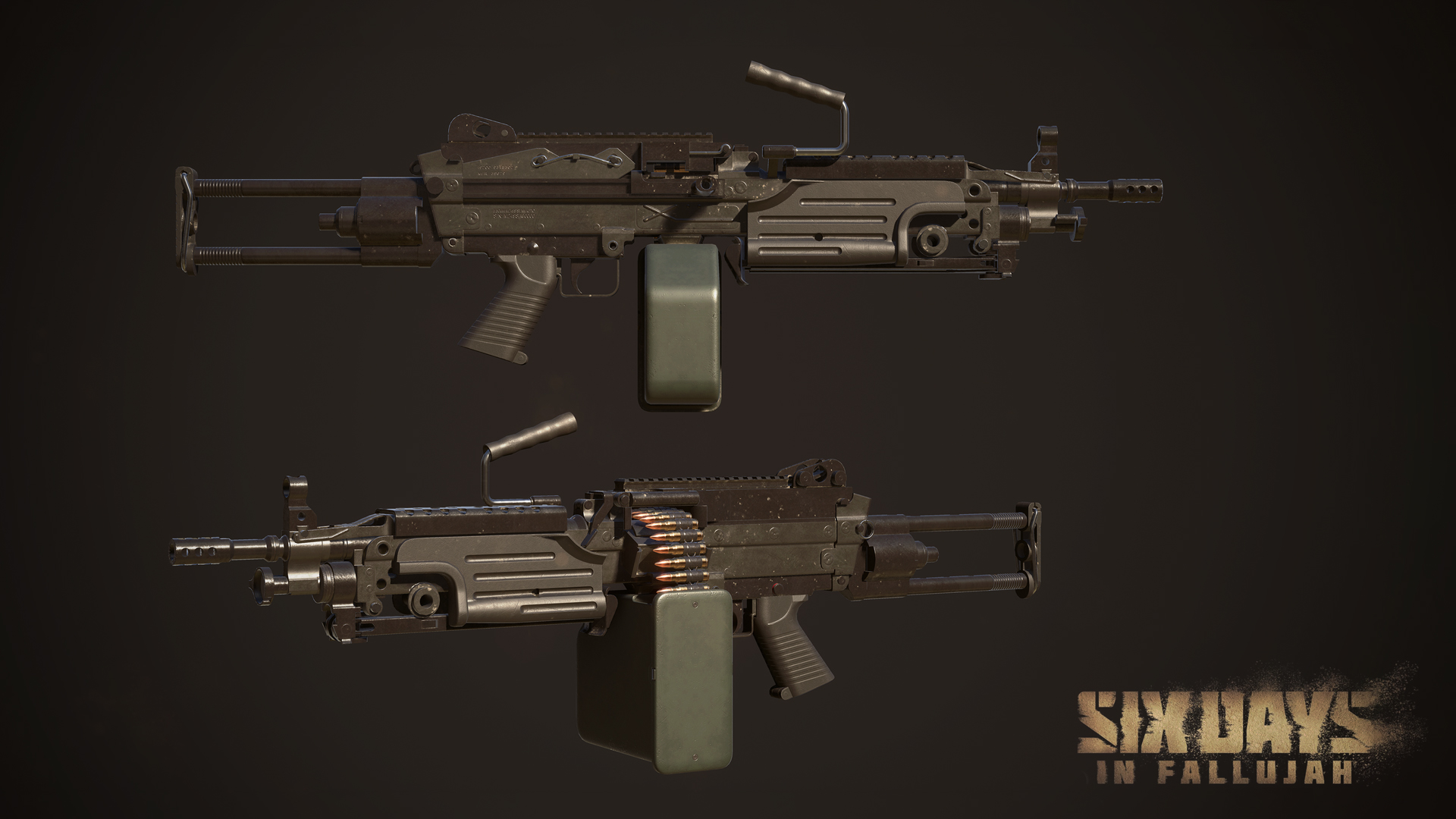 For situations that call for heavy suppressive fire, players will have access to the M249 SAW. Having this in fire teams was crucial for creating opportunities to control the battlefield with flank and maneuver tactics. Players will employ these same tactics in both single-player or cooperative play for mission success.

While there are several degrees of variation when considering weapons used by Marines in Fallujah, our team is confident that our loadouts are a solid representation of the Fallujah Marine’s tools of the trade. As we continue development with community feedback in mind, we welcome comments and suggestions on assets shown in this entry. As for the next SITREP, we’ll continue with weapons on the Insurgent side in Six Days.

Feel free to visit our Forums page to see more images and our latest reload animation.