“You're running with 100 lbs of gear on your back at full speed in a sprint, while you're taking machine gun fire. And the whole time, you're looking straight ahead, but you're also looking down to make sure your feet are still moving below you.”

Authenticity stands at the core of the experience we’re building in Six Days in Fallujah. More than 100 Marines, Soldiers, and Iraqi civilians who were present during the Second Battle of Fallujah entrusted their stories with us so we could have the opportunity to share them with the rest of the world. It’s an opportunity we intend to get right, and so it’s become our responsibility to develop a game that’s both rooted in realism and unlike anything that’s come before.

Of course, developing the most authentic military shooter to date requires countless amounts of reference material. For Six Days in Fallujah, we’ve gathered thousands of photographs and hundreds of videos to accurately portray the people, places, and objects from this period of history. Alongside our growing archive of media, we actively collaborate with consultants for verification checks. These consultants live around the world, from California to Cairo, Boston to Baghdad.

With reference photos and videos in our pocket and consultants on deck, we also purchase surplus military gear and clothing from the Middle East to use as tangible reference material for our artists. We achieve more accurate results with these references in-hand almost every single time. As a result, our gear is as close to real-world material as technology allows us to be.

Please remember that all assets shown are currently a work-in-progress.

Let’s start with helmets. In 2004, there were at least three different helmets being fielded by the USMC—the Cold War era PASGT, the newer and improved USMC Lightweight Helmet, and the even more streamlined Advanced Combat Helmet. What’s more, Special Operations units were fielding newer MICH helmets during this period as well. As you can imagine, all this variation caused for some confusion. We took a look at community feedback and sought after additional helmet models at the studio. From there, a complete remodel of Marine headgear was underway. 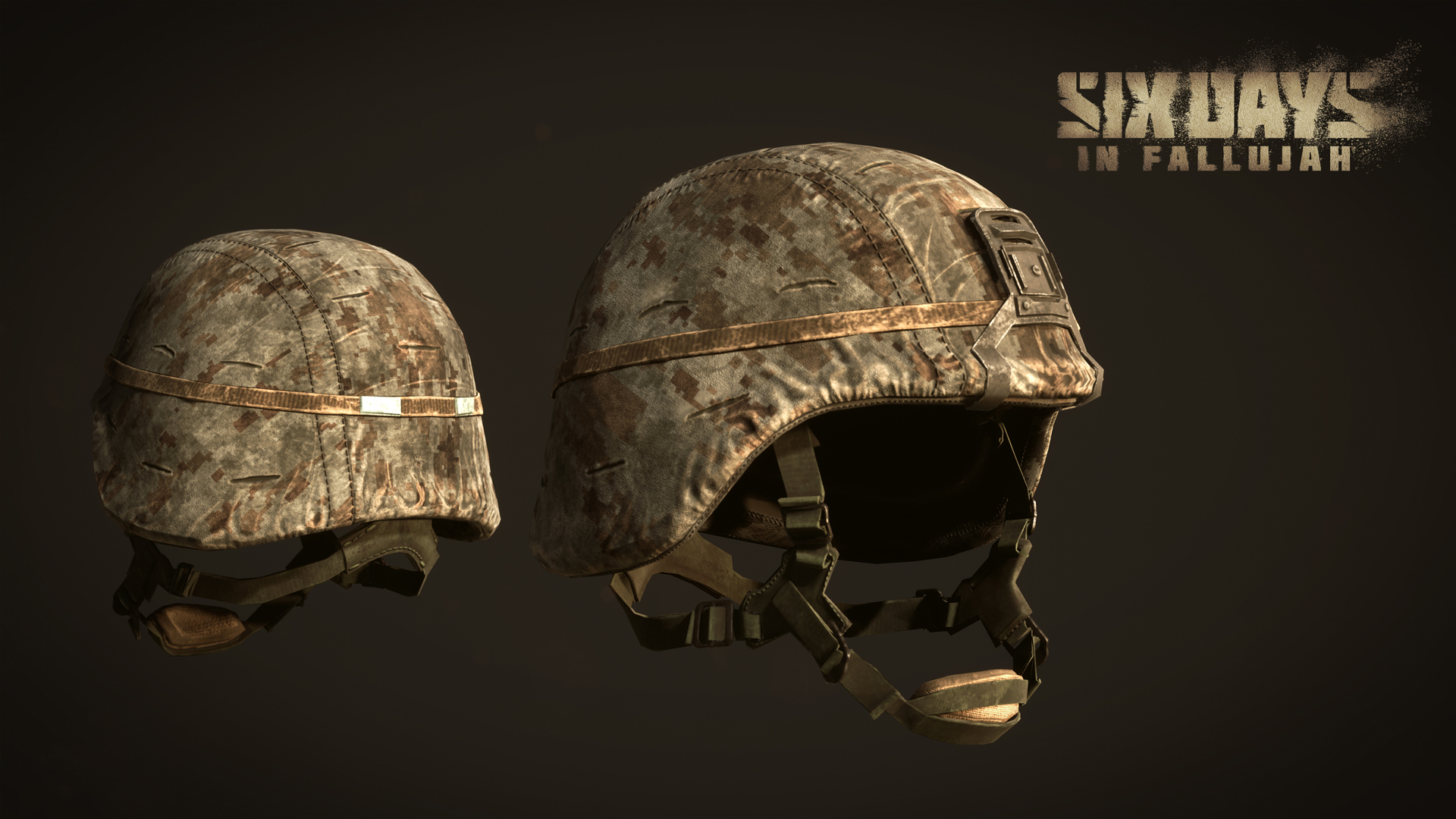 The model and remodel processes pose a few challenges. First, every piece of art is interconnected in a long chain. Any tweaks or adjustments made have a good chance of affecting other pieces of this puzzle. Assets are continuously passed back and forth between character artists, animators, and technical artists to meet authenticity goals both outside and inside of the game engine. There have been cases in which equipment models were identical to our reference material, until they were imported into Unreal. It’s a very dynamic process, and we want to commend our entire art team for the long hours dedicated to getting the details right. Now, our players can rest assured knowing our base Marine character wears a USMC LWH with a more accurate upward curve at the back.

Next up are our flak jackets, or plate carriers. As it turns out, one of our references was a bit too new. The USMC had made some subtle changes between the time of the battle and when we took photos of Marines at Camp Pendleton shortly afterward. Upon realizing we needed to “go back in time” to get closer to the real thing, we acquired the correct Interceptor Body Armor vest. From there, our artists went back to work in a similar fashion to our helmet rework. Now, our flak jackets are more authentic with fewer molle webbing rows. 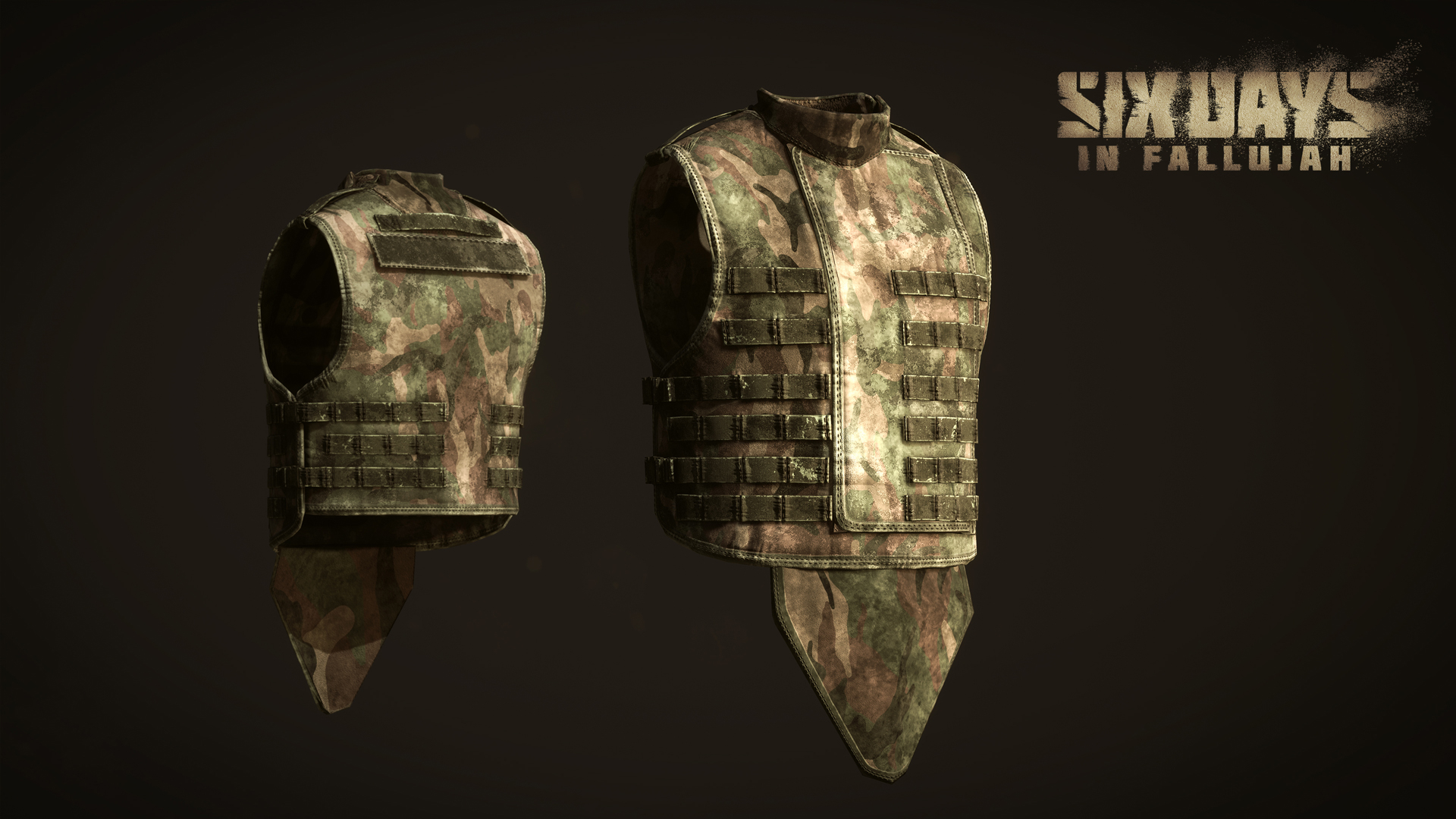 Let’s talk about the variety of pouches featured in Six Days as we received some community feedback on coloring. After digging into more reference material (some of which was provided by the community), we’ve found different levels of color variation. In some cases, magazine pouches were colored coyote tan. In others, they were woodland. Instead of a “one size fits all” solution to coloring, we’re now including multiple variations to paint a more accurate picture as a whole.

Part of our design pipeline uses recolors on our models. We identified an issue in which colors tended to wash out, and we'd lose details from the base texture that was not making its way to the end with the recolor. Now, our new recolor tech is immensely more accurate in terms of color chroma to the actual colors used in factory camouflage patterns and fabric. Taking things one step further, we even aged them slightly as Marines were not typically wearing anything that was 100% fresh off the military quartermaster. 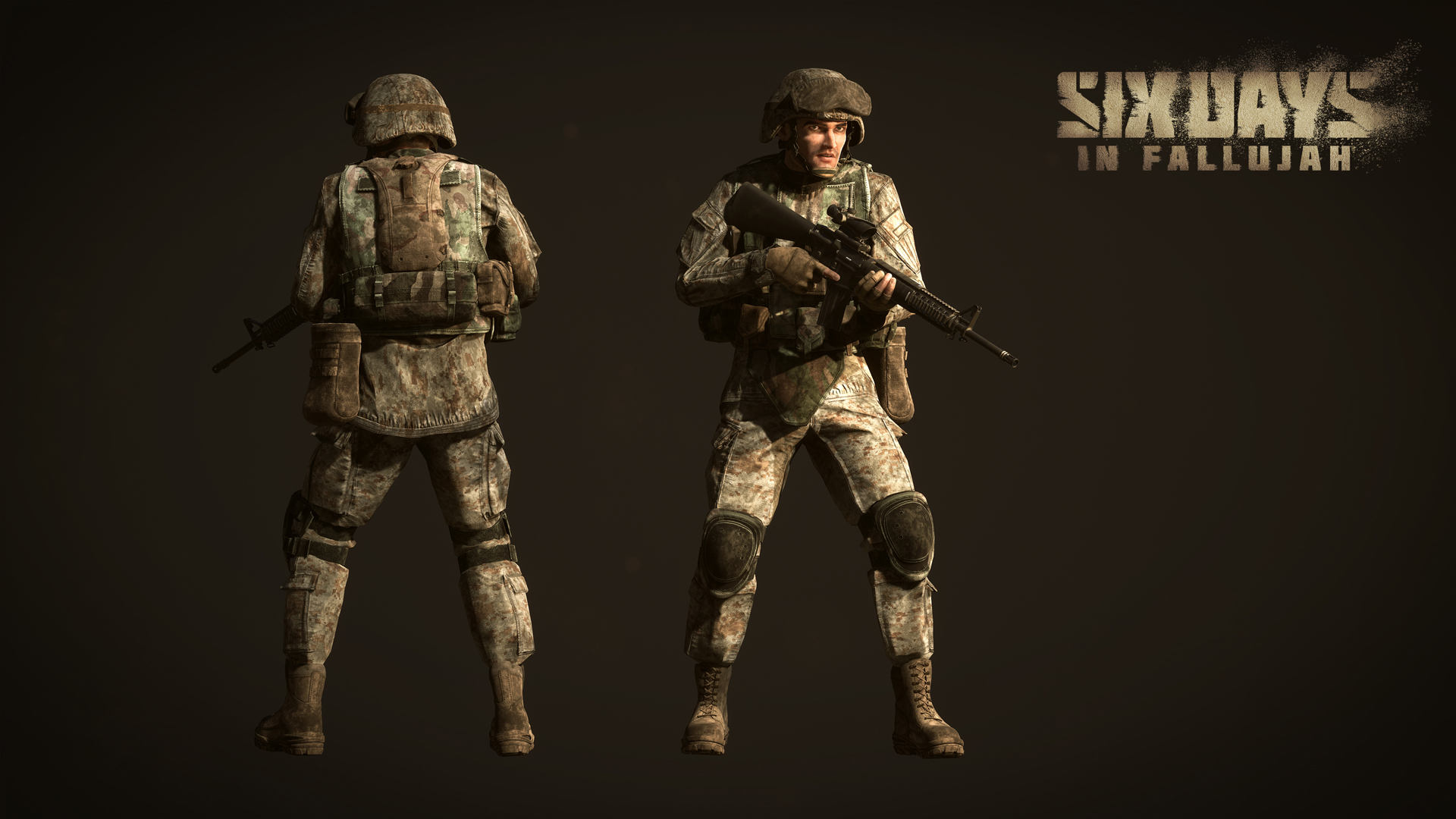 On the topic of hydration pouches, we appreciate the conversations regarding the standard issue versus the CamelBak. However, we decided to go with something similar to the CamelBak for a few reasons. While Marines were given standard issue hydration carriers and canteens, most found themselves wanting more to work with. They often brought their own CamelBaks (alongside personal goggles and sunglasses) into the field. Some Marines we spoke with even preferred the CamelBak to the standard issue! In fact, "CamelBak Products says its sales figures over the last decade indicate that 80 percent of military personnel in the gulf have the backpacks” (source, 2003).

We received some feedback on the shaping of dump pouches, and we want to provide more context on our design decisions. We intentionally designed these to be open-top for animation purposes, as emptied magazines will fall towards the dump pouch to be disregarded. 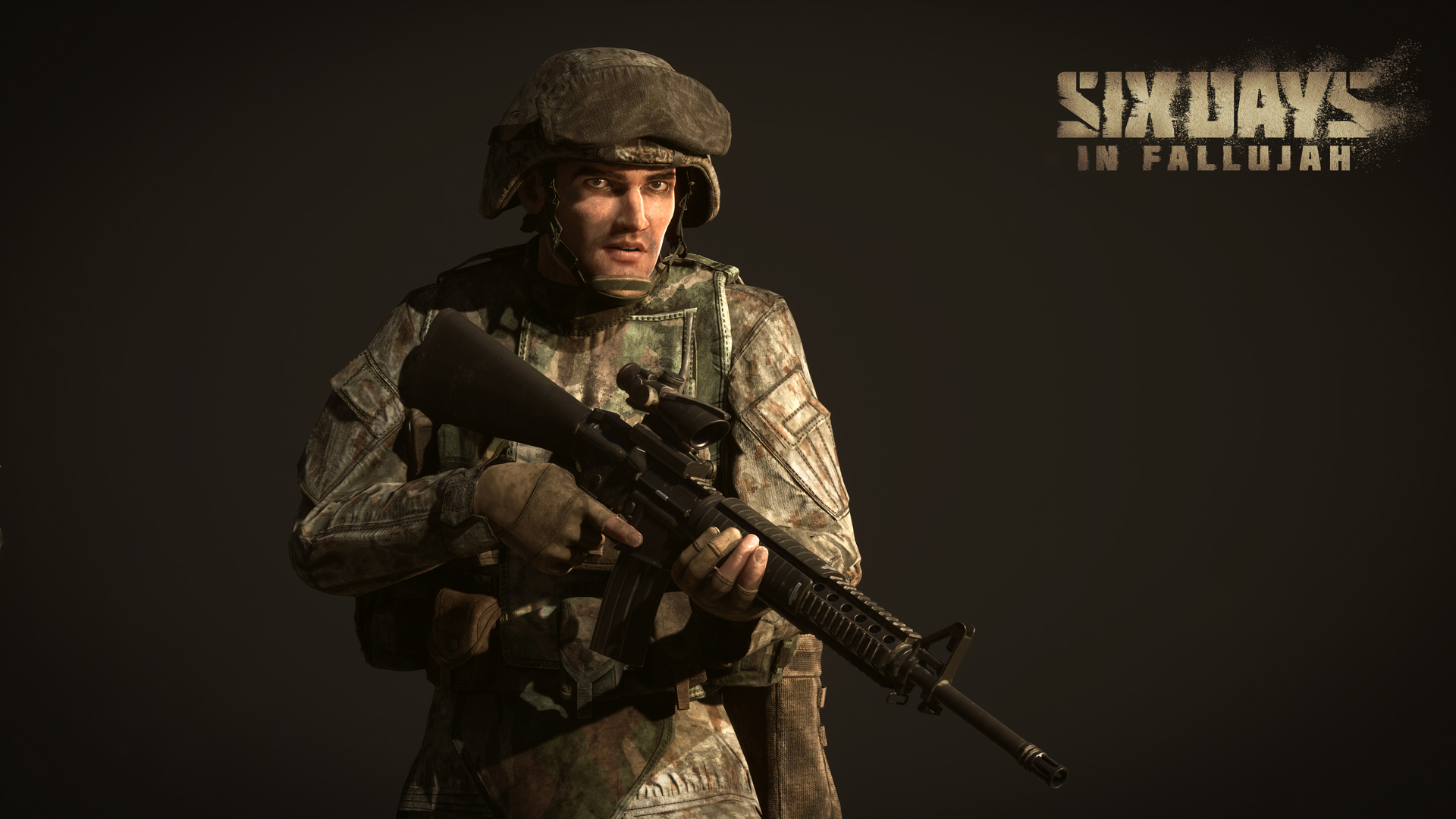 There has also been community interest in equipment durability, and we want to take this opportunity to tease our progress. Our artists have the ability to control the dirt intensity on faces and equipment as players complete operations. This “dirtiness” is tailored to support our very specific pieces of gear as players will even find dirt along folds, crevices, and straps. There’s more work to be done on this feature, but we hope this drives authenticity even farther for our players.

Authenticity in every aspect, including gear and equipment, is fundamental to the entire team working on Six Days in Fallujah. We are committed to getting the details right as we share the stories of those who were there In 2004. Another big thank you goes out to our community for sharing the feedback necessary to help make these visual changes to gear happen. As we continue development, we welcome this same feedback as we work to improve our game every step of the way.