“The defender had the ability to move a lot faster than we did, just because they were not carrying as much gear as we were. They were shooting at you from a room, and they would drop their weapons and they would run somewhere else, or even run to the next building.”

In our last SITREP, we detailed some of the tools of the trade for the USMC Infantry Marine. But, this is just one component of Six Days in Fallujah. The Coalition's opposition came from 31 countries and included a mixture of fighters operating under the Al Qaeda in Iraq banner, Former Baathist Regime Elements, local residents, hired mercenaries, and Mujahideen. These Insurgents had an entirely different weapons loadout than the 21st century western fighting force.

We’ve received a number of questions since our announcement related to Insurgents, and we wanted to take the opportunity to answer some of these in this developer diary. Today, we’re discussing the weapons fielded by the Insurgency in Fallujah.

As the Iraqi Insurgent and foreign Jihadists were defending against the Coalition assault, they were able to store weapons, ammunition, gear, and provisions in homes and businesses instead of carrying it all on their backs. The result was that the average Fallujah Insurgent’s “kit” was much lighter than the attacking Marine’s loadout, prioritizing mobility above all else. Body armor and Kevlar helmets were rare, resulting in lightweight loadouts that allowed for wall jumping, hiding in tight spaces, and crawling in and out of holes, tunnels, and bunkers.

The most a single Insurgent might carry on their person would be their weapon and a chest rig with five or six extra magazines. With tennis shoes and lightweight clothing, Insurgents could get around quickly. This loadout also allowed for Insurgent foot soldiers to abandon their weapons and blend in with the civilian population. Although gunpowder tests were frequently administered to fighting-aged males on the battlefield, some combatants undoubtedly slipped through the cracks by looking like non-combatants.

Weapon authenticity on the Insurgent side has been a welcomed challenge for our team. For the more commonly seen Insurgent weapons, our archive of photographs and videos captured during the battle is used as a starting point, and our artists bring them up to our design standards.

Please remember that this is not an exhaustive list and all assets shown are currently a work-in-progress. 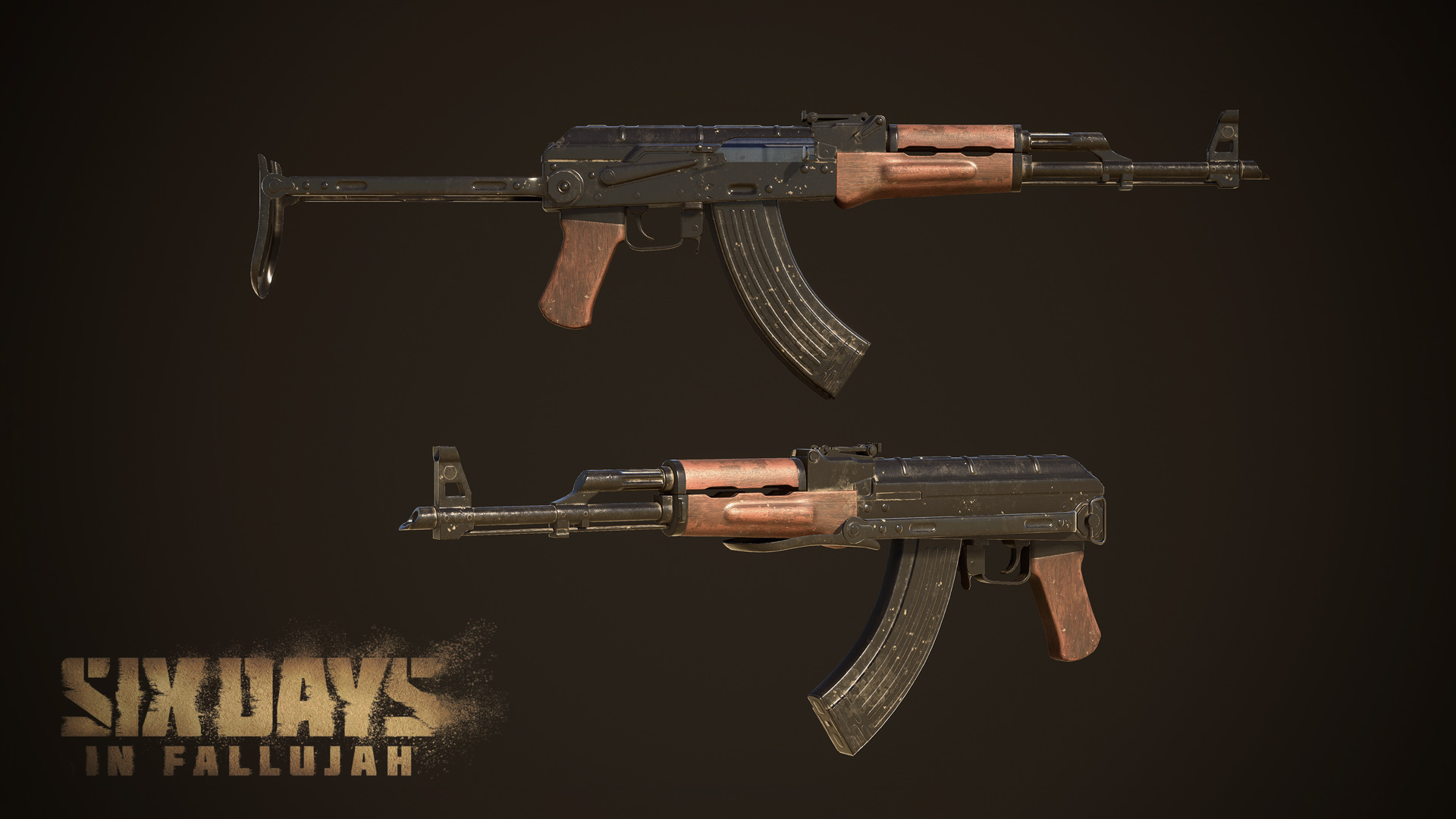 If the military-issued M16A4 was our starting point for the USMC, we’ll start with its rival for the Insurgents—the Avtomat Kalashnikov. The AK-47 and its variants were the “bread and butter” of the Insurgent foot soldier’s arsenal. The primary reason for this was its accessibility—these rifles, components, and 7.62x39mm ammunition were widely available throughout Iraq during this period. The sheer supply of AKs and 7.62 bullets can partially be attributed to the mass looting of Baathist armories that occurred when Coalition victory over Saddam’s regime became apparent. NPR's Phillip Reeves reported that black market AK-47s cost as little as $50 USD following the fall of Saddam. Our Iraqi consultants have even shared that “every Iraqi man can operate an AK—we’re taught that at a pretty young age."

The AK-47 also rivals the M16A4 in versatility, seeing plenty of variation during the Second Battle of Fallujah. As the most common rifle in the eastern hemisphere for more than half a century, modifications became just as widely recognized as the base model. Variant stocks, especially, cropped up into battle, providing Insurgents more combat options in tighter quarters. In Six Days in Fallujah, players will find an AK-47 with a collapsible metal stock modeled after the AKM-S, which is shown above. 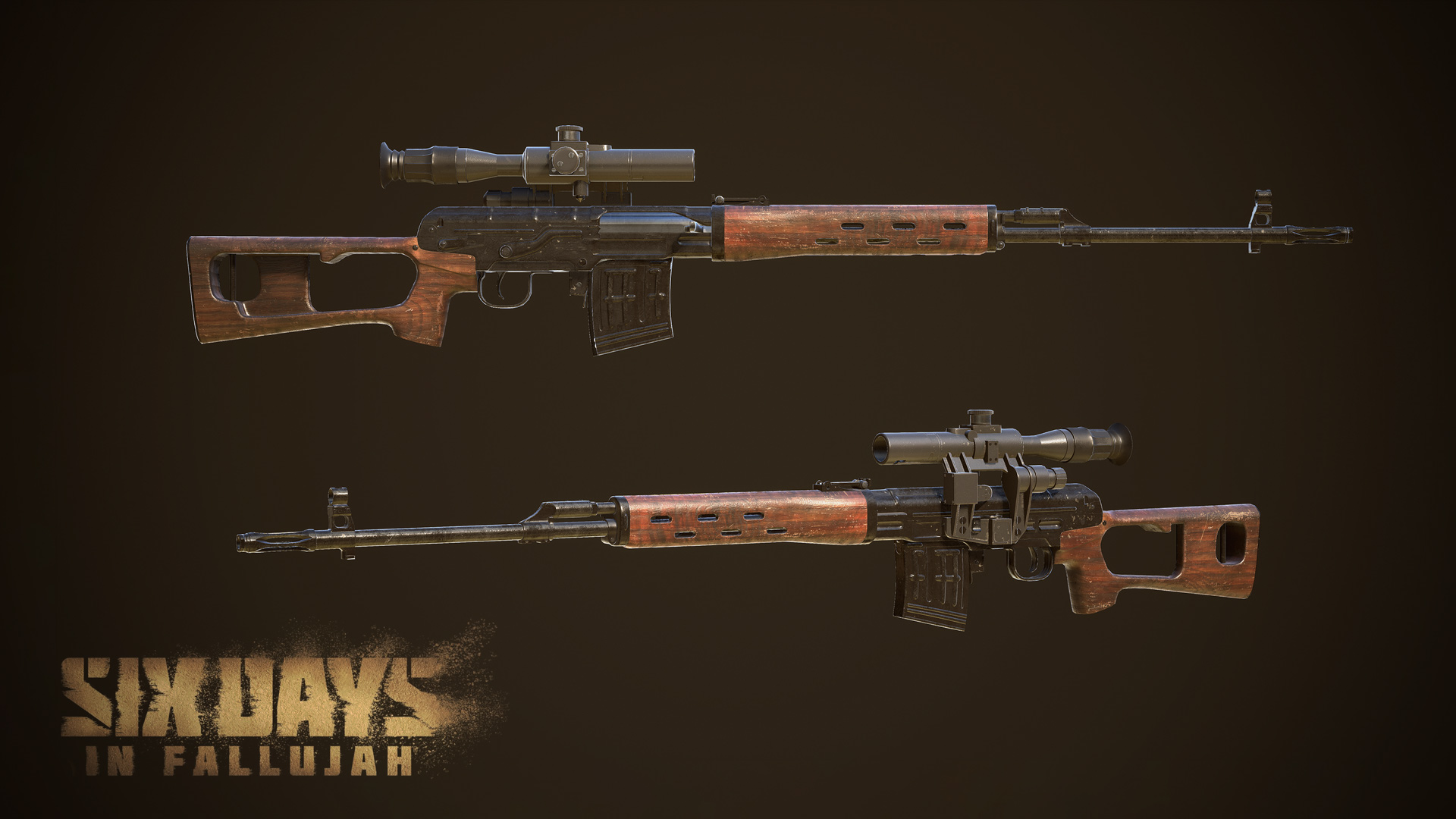 In a city with thousands of buildings of varying height, snipers were extremely common during the Second Battle of Fallujah. From sniper hides deep inside apartment buildings to positions in mosque minarets, crack shot Insurgent and foreign Jihadists wrought havoc on Coalition forces. Long-range combat combined with the home-field advantage made finding a single sniper like finding a needle in a haystack. Their weapon of choice was the Dragunov designated marksman rifle, which caused Marines to think twice before crossing open roadways and rooftops. Players in Six Days will have to do the very same. 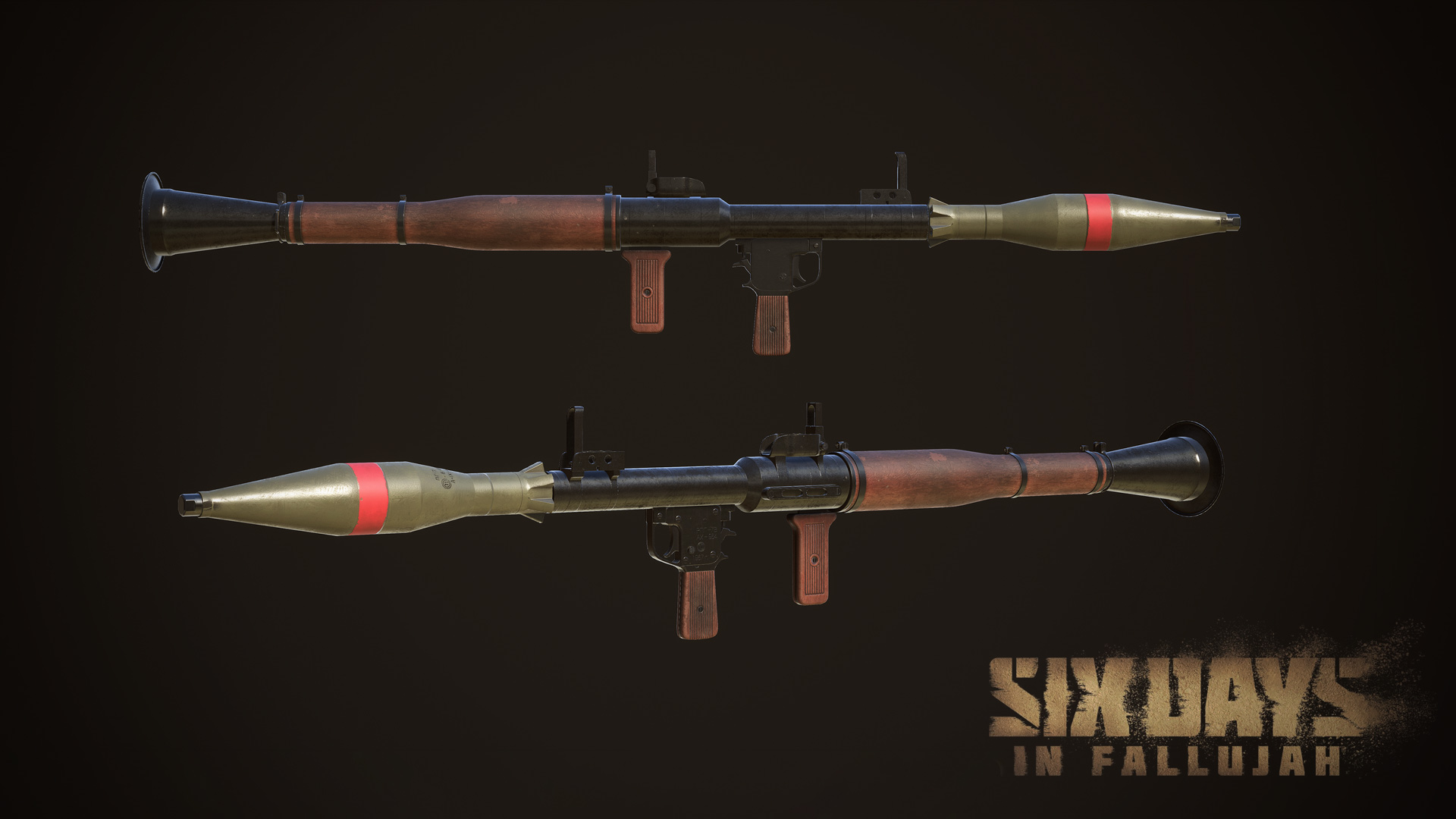 Let’s talk about one of the most widely recognized Insurgent weapons in the genre—the RPG-7. Used primarily as anti-tank/APC weapon, this portable rocket-propelled grenade launcher was used to cut off vehicle support to Coalition forces. With its reusability through reloading, various rockets could be used to adapt to the threat at hand. High explosive rounds were sometimes fired at infantry. Players will often face RPGs when engaging in urban combat in Six Days. 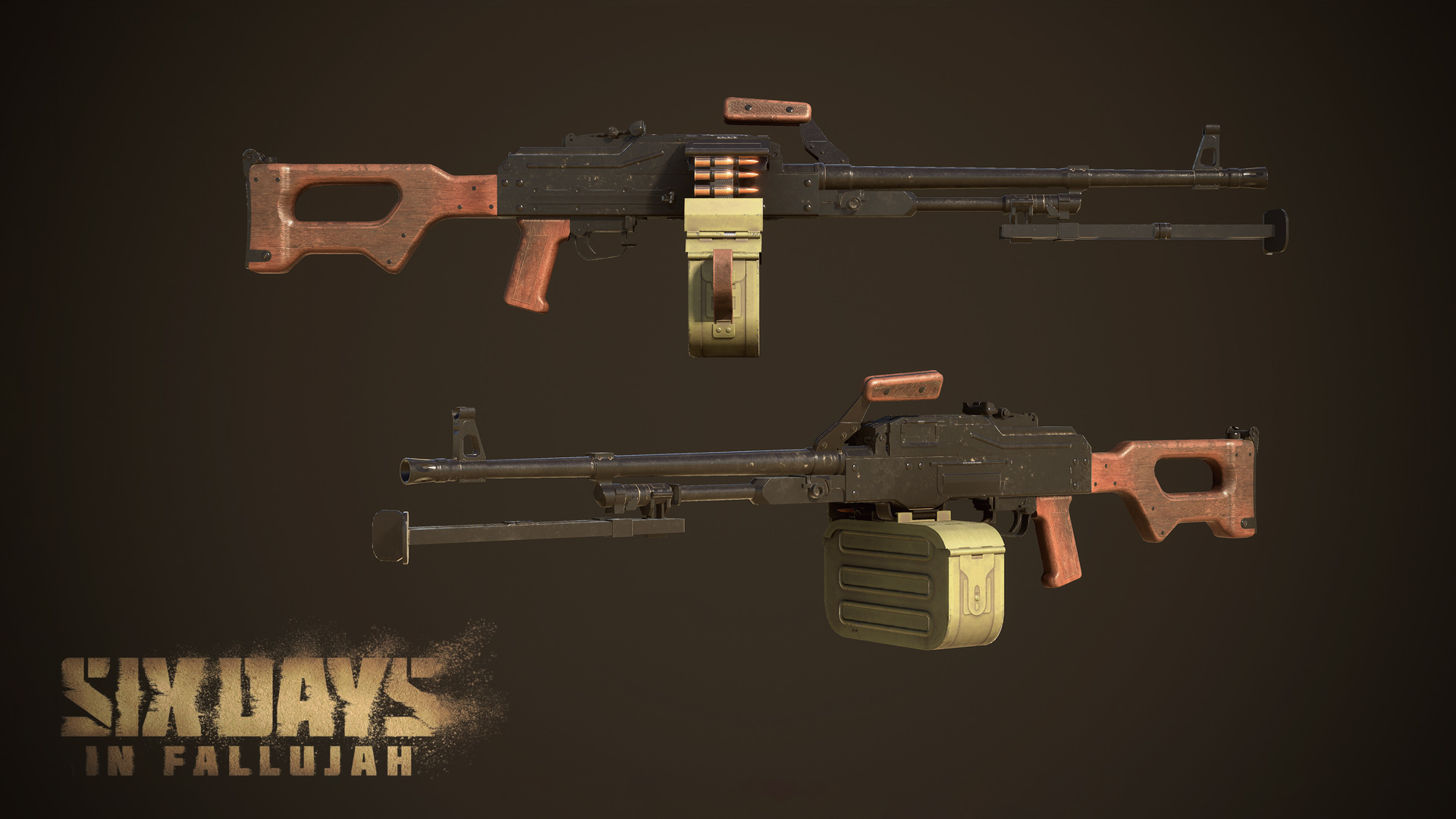 “As soon as I step out of the door, they open up. Machine gun fire comes, it's just ruthless machine gun fire. It’s just 'BRAAAAH!' And I said, 'you gotta be kidding me.' ” —SSgt Elber Navarro

The PKM was one of the Insurgency’s answers to the USMC’s M249 SAW. This 7.62x54mm machine gun was often mounted inside Fallujah houses in anticipation for the USMC. With bipods attached for stability, a swarm of bullets was ready to ambush anyone approaching Fallujah interiors.

Six Days also includes many other insurgent weapons not pictured above, such as mortar tubes and DShK heavy machine gus.

While players don’t control Insurgents in Six Days, we are confident in the systems we have in place to ensure enemy opposition employs advanced tactics in response to individual play. Players will be asked to overcome Insurgent “hit and run” tactics, including ambushes, harassment, and tactical retreat.

As for the common question of picking up and utilizing Insurgent weapons, we want to let our community know we haven’t made any final decisions on this yet. We have a few isolated accounts of Marines using AKs as well as firing RPGs from a distance, but these are few and far between. And, since AKs were so commonly associated with Insurgents, firing one could cause Marines to be misidentified as Insurgents—which was very dangerous, as a few Marines we spoke with discovered the hard way. There are quite a few things to think about before we make final decisions, and we welcome community feedback as we continue development.